Prev Page        Next Page
Here is a little-known method for controlling conventional twin-coil point motors or switch machines from simple SPDT toggle switches instead of the usual momentary contact push buttons.  Just the thing if you want route indication on a control panel or want to simulate a mechanical lever frame.
Controlling Point Motors by Toggle Switches

Most modellers control point motors using push buttons, momentary contact switches, probe and contact systems, etc.  It is actually possible to control them from a normal single-pole toggle switch, which can be very useful for indicating point settings on a panel or for building a simulated lever frame, as well as permitting simple panel-based interlocking, LED indicator and signal control.  This is done by giving each point motor its own personal miniature CDU.

The commonest type of circuit for this involves a DPDT switch, two wires from the panel to the point motor, and two capacitors for each motor - effectively a separate CDU for each side of the point motor.  The following circuits do the same job with only one of everything: an SPDT switch, one (or two) wires from the panel, and a single capacitor.  The first variant requires only a single wire from the panel to the layout.  The second requires two wires but eliminates the diodes, but also requires that the point motor has coils that are completely separate electrically (e.g. Peco).  I am using the first variant on my layout Plymouth Citadel.

In the diagrams below, when the switch is moved to the 20V position, the capacitor begins to charge through the left point motor coil, which acts as a resistor.  The point motor initially has 20V across it, which decreases as the capacitor charges up.  This is just like a normal CDU, but acting in reverse.  The capacitor eventually charges up to the full 20V, and the circuit is then quiescent - everything is at 20V, so no current flows and the situation can remain this way indefinitely.  When the switch is returned to the 0V position, the same thing happens again in reverse - the capacitor discharges through the right coil until it eventually goes back to 0V.

The circuit requires a simple smoothed power supply circuit.  One of these should cope with any reasonable number of point motors, although you may want to have one per station if different operators can be switching points at the same time.  You may also need to add a second capacitor here to beef up the power.  The 10K resistor is there to gradually discharge all the capacitors after the layout power is switched off.  Modern capacitors can hold their charge for hours, so without this resistor working on the layout could hold an unpleasant surprise!

All capacitors involved need to have a voltage rating of 25V or more, and the diodes need to be suitable for the type of point motor.  If you use an AC supply of more than 16V, you will need to use 35V or better capacitors instead.  Low-power motors could use 1 amp diodes, all others should use the larger 3 amp type.  Sticky point motors may require extra power, so either use a 4700uF capacitor for these ones or a pair of 2200uF caps in parallel.  Each point motor should normally have its own separate circuit.  For crossovers with two sets of points, you can either share one circuit (using a larger capacitor or two in parallel), or have one circuit for each.

The only real drawback to this circuit is how it can behave when powering up the layout.  Any point switches that are in the ON position will immediately try to fire their point motors and charge up their capacitors.  This can put a brief but heavy load on the power supply.  This should not be a problem, but if necessary you can put a 5 ohm 10W wire wound resistor between the bridge rectifier's positive terminal and the 4700uF capacitor.  This will slow down the initial charge up phase yet have minimal impact on normal operation.  In practice, I haven't found this to be a problem.

It is trivial to add relays for switching frogs, since a steady voltage is always available.  Remember to use a suitable voltage reduction resistor for the relays similar to the circuits above.

Two variants of toggle switch control of point motors. One power supply can handle multiple points - one per panel is recommended.

A point motor control board of this type, fitted with two latching relays for 4 poles of switching. Space has been left for a second 2200uF cap, which I use for switching double slips which require a bit more force.
Route Indicator LEDs and Mimic Panels

This method of point control makes it almost trivial to add LED route indicators on the control panel, without requiring extra switch contacts or the use of point motor switches or relays.

The LEDs and resistors are simply connected between the 20V and 0V rails and the centre pin of the toggle switch.  The resistor values should be chosen to give a suitable level of brightness, but must be at least 1K.  Using a larger value such as 1K5 or 2K2 is preferable to reduce power consumption and heat generation under the panel.  The use of 1/2 watt  resistors is required here if with values of 1K or higher voltages, and recommended regardless.  They are the same physical size and cost about one cent more than 1/4 watt resistors, so there are very few good reasons to use the lower-power types.

If you need to display multiple LEDs for a particular route, the most straightforward way is to just add more LED-plus-resistor pairs on that side of the switch.  A better way is to wire several LEDs in series with the one resistor - this saves power and generates less heat, but will give a slightly lower brightness unless you also drop the resistor value by one or two steps (e.g. from 1K5 to 1K2).  This works out to about 1 step for every two additional LEDs.  The simplest way is to try it and see what works best.

More sophisticated schemes such as illuminating only one road out of a fan of sidings are nearly as simple to do, although this sort of thing does require additional poles on the switches.  Each has to be thought out carefully.  A simple example with two points and three sidings is shown below. 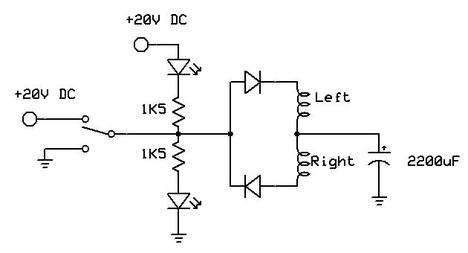 An example of panel wiring for more complex route indication - one of the three LEDs 1-3 is illuminated depending on which siding is selected. Note that switch B needs to be a double pole type.
Interlocking

This method can also be the basis of a simple interlocking scheme for points and signals.  A lot can be done without requiring relays or special electronics, but more switch poles are required.  If you are thinking along these lines, it would be best to standardize on 3- or 4-pole switches for all points.  The more poles, the more you can do with them.