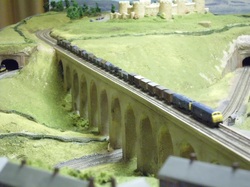 Sarum Bridge is a small T Scale layout, consisting of a wrapped dogbone track plan designed to automatically handle up to three trains following each other around the layout.  It has been shown at the AMRA Caulfield Exhibition in 2014 and 2015 and AMRE Adelaide 2016.

I opted for a dogbone layout instead of a double oval so that all trains will travel over the whole layout and so provide more visual variety by running past any particular spot in both directions.  This involved wrapping the dogbone several times to eventually reach five times the layout's length.  This required about 15.5m of track, or about 4 scale miles or 7 scale km.  A double oval would have provided redundancy allowing one circuit to continue running even if there were problems on the other, but that type of layout is extremely common at exhibitions here in Australia, and I felt like doing something different.

I originally intended to have two main visual attractions on the layout - the long viaduct and a sizeable station.  As the design evolved, the two large hills also needed something so New Sarum Castle and Sarum Village were added.

The minimum radius on hidden track is 6"; on visible track it is 7.5".  The maximum gradient is 1 in 30 on the back straight.  The station platforms are sized for a full 7+2 HST rake, and can handle longer trains with the tail end left dangling past the end of the platforms.
Animated Features

As an exhibition layout, Sarum Bridge has a few animated ... well... gimmicks.  In addition to the trains (not a gimmick!), there are working colour-light searchlight  signals, a working level crossing, and even a small working road system.
>>> Next Page (Construction, Tracklaying and Scenery)